Rumors mar the MR campaign...aren't we lacking in understanding by atleast a hundred years... 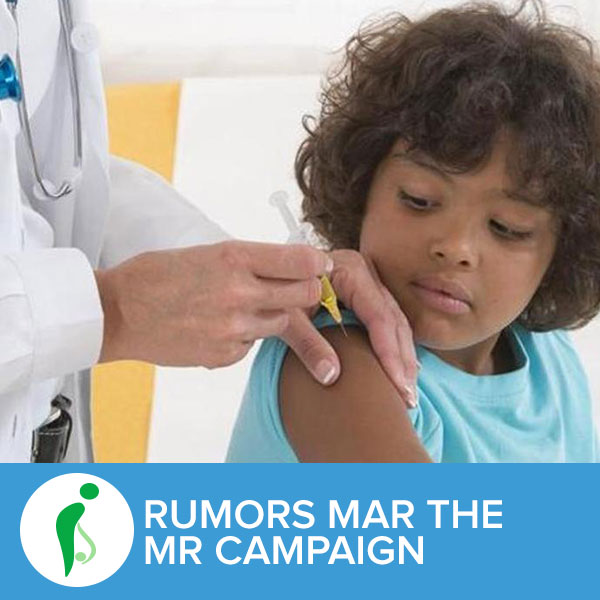 Rumours shared on Whatsapp and Facebook urging parents not to get their children vaccinated against measles and rubella (German Measles) is threatening India’s campaign to eliminate the disease that kill 46,000 children, mostly under-five, each year.

Under India’s new measles vaccination campaign, all children from ages nine months to 15 years will be vaccinated with the measles-rubella vaccine (MR-VAC) in five states -- Tamil Nadu, Karnataka, Puducherry, Lakshwadeep on February 7, and Goa after the model code of conduct gets over after state elections.

Fake alerts, which include texts and audio clips, claim the vaccine is banned in the United States for causing serious side effects, including damaging a child’s immunity and memory and is being pushed in India by the global pharmaceutical industry looking for a market to dump their products.

“The is a test vaccine which has been found outside India and that they want to test it on Indian children”, reads one. “It affect the child’s concentration and daily activities and is band (sic) in the US,” alleges another. “The vaccine has deadly side effects and is sold by Modi to promote foreign pharmaceutical companies,” reads a third.

“These messages are untrue. the vaccine, MR-VAC,is made by the Serum Institute of India, which is the world’s largest producer of the vaccine and provides vaccines to most countries in Africa and Asia.

The vaccine is safe, effective and approved by the WHO for preventing infection in children,” says a health ministry official who did not want to be named.

A vaccine-preventable disease, measles is caused by a virus from the paramyxovirus family and spreads through air and direct contact. It causes symptoms of high fever that lasts 4 to 7 days, with a runny nose, a cough, watery eyes, and small white spots inside the cheeks developing in the initial stage. After several days, a rash erupts on the face and upper neck and then spreads to the hands and feet. On average, the rash occurs 14 days after exposure to the virus.

The MMR vaccine against measles, mumps and rubella is given to children at ages nine months and 15 months under India’s routine immunisation programme, but coverage for the booster shot remains a low 50-60%, which results in partial protection. About 15% of vaccinated children do not develop immunity from the first dose, so unless all the children are fully immunised, an outbreak is likely.

“Globally, measles has a case fatality -- deaths per 100 infections -- of 0.2-0.3%, but in countries with poor public health infrastructure, the case fatality is 1-2%,” said Dr Satish Gupta, health specialist, immunization, Unicef.

A systemic review of studiesfrom across 12 states over four decades showed that the median case fatality ratio in India was 1.63%, with deaths being higher among under-five children and children from the backward class.

“MR-VAC protects those who’ve been missed as well as builds herd immunity in the community by lowering infection and with it, the virus in the environment,” said Dr Gupta. “Much like polio, we have to eliminate the virus from the environment to make it safe for everyone. Vaccination has eliminated measles in the Americas (north and south Americas) , India can do it too.”

Reach us for any query, enquiry or complaint.
We shall revert back to you with in 24 hrs of operations.